The pie chart below shows the main reason why agricultural land becomes less productive. The table shows how these causes affected three regions of the world during the 1990s. 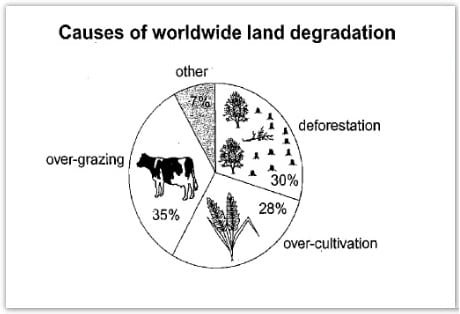 The pie chart demonstrates the reasons that contributed to decreased agricultural efficiency globally, particularly in three different regions in the 1990s, namely: North America, Europe and Oceania. It is clearly seen that there are significant regional and causal variations.

Firstly, in the 1990s, overgrazing was the most remarkable reason for land degradation globally (35%), closely followed by deforestation of woodlands (30%) and overcultivation (28%). Other factors contributed insignificantly by 7%.

Secondly, European land degradation exhibited the highest figures with 23 % mostly due to deforestation of its woodlands. On the other hand, land degradation in Oceania was considerably lower at 13 % principally due to overgrazing (11.3%) and to a much lower extent by deforestation (1.7%). Interestingly, North America had the lowest figures with only 5% of its agricultural efficiency lost predominantly due to overcultivation, and had a negligible effect of deforestation.

In summary, the 1990s demonstrated remarkable land degradation globally. Europe had significant land degradation in contrast to North America and Oceania which were better in preserving agricultural efficiency.