The pie charts show the electricity generated in Germany and France from all sources and renewables in 2009. 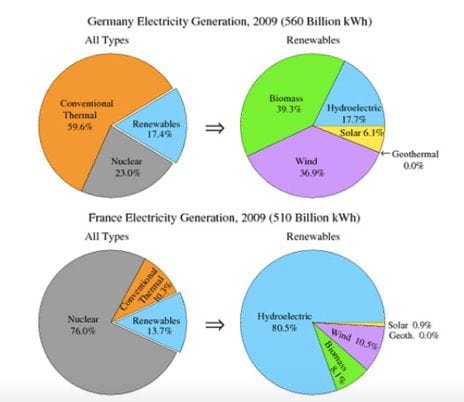 The pie charts compare the main energy sources in two European countries, France and Germany, in 2009, with further detail provided regarding the use of renewable energy.

In 2009, Germany’s electricity generation was higher (560 Billion kWh) as compared to France (510 Billion kWh). The most striking feature is that France relied on nuclear power to supply 75% of its energy demands, while Germany relied mainly on conventional thermal energy, providing almost 60% of the electricity. Nuclear energy featured at only 23% in Germany.

Both countries used renewable energies to a similar extent in 2009, with France relying on green energy for 13.7% of its demands and Germany for 17.4%. However, the make up of the renewable energy sector differed greatly between the two countries. While France relied mainly on hydroelectric energy energy (80.5%), Germany had a more diverse portfolio with biomass and wind providing almost equal proportions of energy (39.3% and 36.9% respectively), followed by hydroelectric at 17.7%. Solar power featured only minimally in both countries, with 6.1% and 0.9% of the renewable shares in Germany and France respectively.

To sum up, Germany generated more energy than France in 2009. Moreover,  the energy sources that Germany relied on were much more diverse than those in France.

Complete the FREE LEVEL CHECK above and get an EXTRA 10% off on ANY plan. Use Coupon Code: AUSSIE at check out
Get Started Now