The pie chart shows the percentage of women in poverty and the bar chart shows poverty rates by sex and age. They are from the United States in 2008. 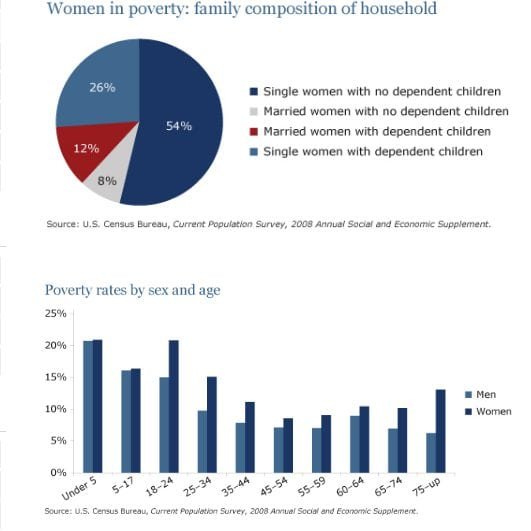 The pie chart gives information about the proportion of females considered in poverty while the bar chart compares men and women of different age groups in the same situation in the United States.

Overall, the most striking facts to emerge from the graphs are that single women made up the biggest proportion of females in poverty and more women than men regardless the age were in poverty in the given year.

In detail, women with no dependent children made up the largest group with more than a half of female in poverty. Following this, were single women with dependent children which accounted for just over a quarter of the impoverished  females. The remaining percentages were represented by married women with and without children at 12% and 8% respectively.

Concerning the poverty rates by age and gender, there was a noticeable difference between the age categories. Persons aged less than 24 years old suffered the most with figures between 15% and 20% for both genders, although the percentage of women was always slightly higher than that of men. On the other hand, women aged between 35 and 74 years old and men aged more than 25 were less affected with less that 10% living in poverty.