The pie chart below shows the main reasons why agricultural land becomes less productive. The table shows how these causes affected three regions of the world during 1990s. 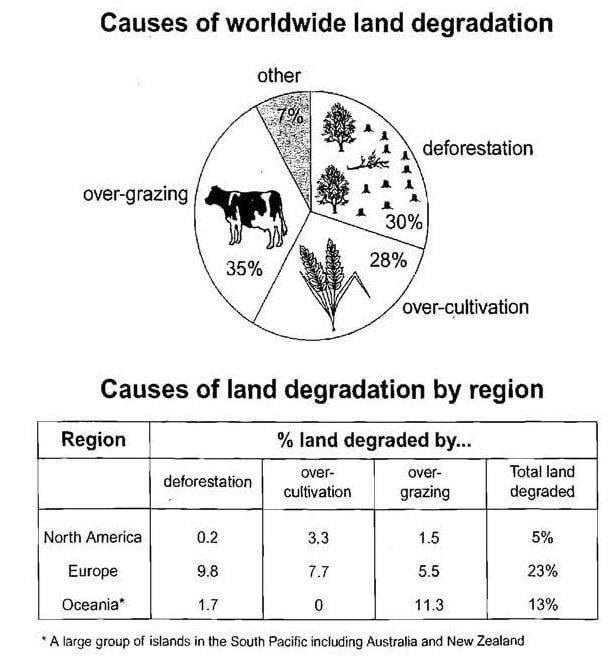 The main factors responsible for the decreased productivity of agricultural land in North America, Europe, and Oceania during the 1990s were summarized in a pie chart and a table.

the most serious problem was over-grazing. It has caused the world to lose 35% of agriculture land. This problem is followed closely by deforestation and over-cultivation.

The area that has lost most proportion of its agriculture land was Europe at 23% However, Oceania and North America was not as badly affected, losing 13% and 5% of its farmland respectively.

Surprisingly, the main problem faced by each area is different from one another. The problem with over-grazing is especially serious in Oceania, resulting in 11.3% of its land unsuitable for agriculture. On the other hand, deforestation that caused 9.8% of agriculture land unusable was the major problem faced by the European farmers. Although over-cultivation was the primary threat in North America, it was not a problem at all in Oceania.

The pie chart gives information about the causes of land damage. The table compares the causes of this phenomenon in North America, Europe and Oceania.

Overall, the most striking facts to emerge from the graphs are that overgrazing accounted for the first reason of land degradation worldwide and Europe was affected the most as compared to the two other regions.

In detail, overgrazing represented the primary cause of land degradation at more than a third followed by deforestation and over-cultivation which accounted for approximately 30% of land degradation. The remaining proportion was for unspecified causes at 7%.

On the other hand, causes of land damage varied significantly between the regions. In fact, Europe was the most affected with just under a quarter of its land degraded. This was due to deforestation at 9.8% and over-cultivation at 7.7%. In Oceania, 13% of the land was damaged mainly by overgrazing. Finally, America had the lowest proportion of land degradation with just 5% of which 3.3% were caused by over-cultivation.