The charts below give information on UK spending habits for books bought over the internet. 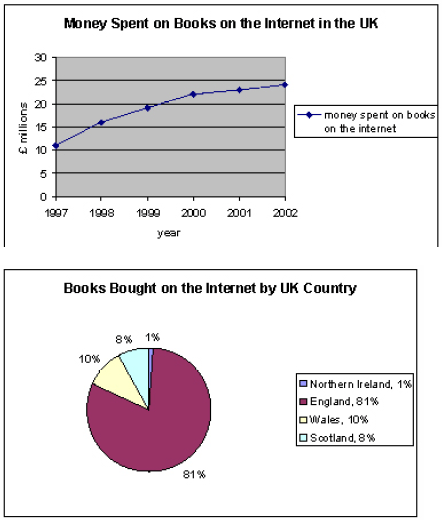 The line graph provides information about the amount of money incurred on online book shopping in the UK from 1997 to 2002. The pie chart compares four UK countries in terms of the proportion of books bought online.

It can be seen that the amount of money spent on books online rose steadily throughout the period shown. Among the compared countries, England had by far the highest percentage of online books purchase, while Northern Ireland had the lowest proportion.

In 1997, 10 million pounds of books were purchased online in the UK. This figure grew steadily by 5% each year for the next three years before reaching 25 million pounds in 2000. In contrast, between 2000 and 2002, the amounts of money spent were increasing, albeit by a smaller amount. By 2000, a total of 20 million pounds had been spent on books online, the highest for the period shown.

It is also noticeable that England accounted for most of the books purchased online, at 81%. The remaining 20 percent of books were purchased by Wales (10%), Scotland (8%) and Ireland (1%).